How To Sell Time (IWSG & an Announcement!)

If only you had a corner on that market, eh?

The IWSG question this month is a timely one (pun intended):

Did you ever say “I quit”? If so, what happened to make you come back to writing?

When I was in high school, I backed away from writing for a time. It was a wise decision as it made room for social aspects I would have otherwise missed--including meeting my husband. It wasn't an "I quit" per se, but I never expected to seriously return to writing.

Five years later, when I was married, a college student, and needing some sanity, I pulled out my old notebooks and FINALLY finished my first novel. All 140,000 words of it. (For non writerly types, that's about twice as long as your average book.) Next thing I knew, I'd written a novella that eventually became MOONLESS, then a musical with a full orchestral score, then six other books...

It was the right time for writing.

But, as is inevitable, I've cycled into a new season. All my writerly loves are sitting in their file folders, begging for my attention...and not getting it. There will come a time again when I write as prolifically as before, but right now, I'm consumed with 5 major projects: one in his sophomore year of college at age 16, two of them in 5th and 7th grade home school, one in home preschool, and the last one...

For those of you who may not have seen the announcement: 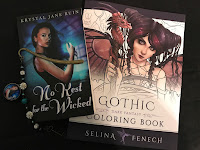 Three weeks ago, Krystal Jane Ruin shared NO REST FOR THE WICKED along with two truths and one lie. Anyone who guessed was entered to win an AWESOME prize pack.

From Krystal: I've never been to Spain, but this exact thing happened to me in Edinburgh. I got turned around after exploring Edinburgh Castle, and the cemetery was across from the dorms we were staying in, not a hotel. I get lost a lot.

And now, about selling time: 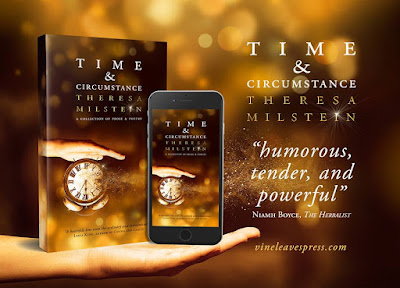 With subtle wit, and poignant imagery, the unrelenting passage of time connects the vignettes in Theresa Milstein's Time and Circumstance. This reflective collection of real and imagined poetry and prose, speculates on an erratic childhood, the uncertainty of adolescence, and the reality of parenthood, through flashbacks of love lost and found.

"This everyday, why again, sometimes
ignored tune has measured time in notes,
seconds, minutes, days, years, and so it goes.
It's a measure of the man he will become." 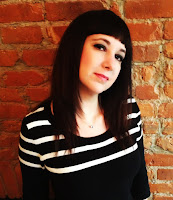 Theresa Milstein writes middle grade and YA, but poetry is her secret passion. Vine Leaves Press published her vignette collection, TIME & CIRCUMSTANCE on March 21, 2017. She lives near Boston Massachusetts with her husband, two children, a dog-like cat, and a cat-like dog. For her day job, she works as a special education teacher in a public school, which gives her ample opportunity to observe teens and tweens in their natural habitat.


For Theresa, picking a favorite cheese is like choosing a favorite child ... almost. You might stumble across her eating a soft blue cheese or a gouda with a little crunch, some fresh bread, olives, and wine while hanging out with friends or family who are visiting her home.

Theresa gave me two truths and one lie to test your "lie detector" skills. If you guess the lie, right or wrong, you will be entered to win an ebook of TIME AND CIRCUMSTANCE, and if you guess correctly, you will win a SIGNED HARDCOPY! (Open internationally.) IF YOU DON'T HAVE A BLOGGER ACCOUNT WITH AN EMAIL ON THE PROFILE, PLEASE LEAVE YOUR EMAIL ADDRESS IN THE COMMENTS OR EMAIL IT TO crystal@crystal-collier.com WITH YOUR SCREEN ALIAS.

1. Right after college, I landed a job as a make a makeup artist at Macy's, Herald Square, New York City. This led to a year doing makeup for a few shows on The Food Network.

2. During the summer, I worked as a carney in the game booths on Long Island. I hated working the fixed games, though I hated running the sticky cotton candy booth even more.

3. One semester, I interned with a U.S. Congressman in New York, which meant handling a lot of angry phone calls, looking up data, tracking potholes, and attending events.

So sleuths, which is the lie? What would you do with a spare bottle of time? Have you met Theresa? Do you read poetry? Have you ever quit something you LOVE?
Posted by Crystal Collier at 8:00 AM