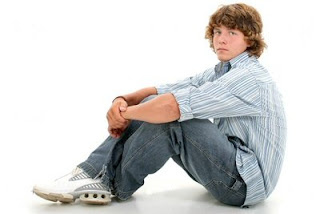 "Science hates you." Mr. Gilchrest dropped an exam on the desk.

Staring at the giant red "F", Kyle shook his head. Spit wads snowed from his too-curly hair, a reminder that he occupied the first row today. Even if he hadn't, the result would be the same. As the only West Junior High pupil to repeat the eighth grade three times, he should expect it, the trouble that landed him in hall fights twice a week.

He wasn't stupid. Heck, he could name every artist from the fourteenth century on, so why couldn't he remember the rudimentary layers of the earth? As he scowled at the belligerent cross, he began to consider maybe he belonged in a "special needs" class after all.

"...and although it was a relatively simple test, I'm pleased with most of your results." Mr. Gilchrest grilled Kyle with a frown, indicating the statement didn't apply to him. "A great review. Most of you seem to remember the material from last year. Now, for next weeks-"

The classroom door flew open. Principal Jorgan, five-three and as wide as he was tall, fumbled forward--as though he'd been kicked through the frame. Kyle imagined him a football, wide, brown, skidding to a halt on the low-grade linoleum.

The principal straightened his flamingo tie. "Excuse the intrusion Melvin."

His Jersey accent made Kyle cringe. The "pal" in his title didn't so much apply here. Jorgan was only interested in making sure Kyle passed enough classes to boot him off to high school. Nobody wanted a problem child.

A chorus of "Oooh!" turned all eyes his direction. Kids snickered.

Kyle sighed and got up, dusting the floor in more spit bombs, and followed the principal out the door.

It was not uncommon for him to be summoned out of class--in light of the last fight, or some recent vandalism he got blamed for, but usually a secretary came to escort him--not the head of the school. He studied the disciplinarian as they moved down littered halls, wondering what this short-on-stature not-on-temper man had in store for him now.

Instead of returning to the office, Principal Jorgan led him out the side doors, to the sunny playground, and turned. His face was red from the walk, eyes curious and worried. Had he ever looked at Kyle that way?

Mr. Jorgan cleared his throat, and held out a minuscule key on a regular sized ring.

"What is-" The disciplinarian dropped it in Kyle's palm, halting his question. He gave the boy another wary look, shook his head, and returned to the air conditioning.

Kyle debated returning to science class, but the sun, the last of summer, forbade it. He turned the key over, numbers refracting the light.

"It's your number." British baritone drew his attention to a shadowy stairwell. "If you want it."

A man in a dark suit sat, cross legged, peeling a peach.

The peach man rose. Kyle cranked his neck, peering up at the stranger as he approached, way up.

"How about if I call you tall?"

The stranger did not smile.

"I can tell you where to take that key, or you can stand here making ridiculous observations." One continued to frown.

"Um, about that," Kyle scratched his head, littering the asphalt with paper remnants. "Shouldn't I be in school--trying to finally pass 8th grade? And who are you anyway? Why did I get pulled out of class?"

Here at last the peach-peeler grinned, a grim crescent of aged skin. "Go home Kyle Fiarbock, or shall I call you Ferdinand?"

Kyle reddened. No one knew that name. Only his "perfect" mother who abandoned him shortly after birth would ever understand the reason for such an atrocious name. Dad still puzzled at it.

Goosebumps crept up Kyle's arms as One reached into his pocket, removed a cell phone, and disappeared. 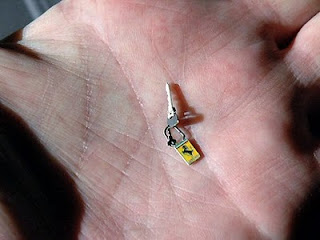 Posted by Crystal Collier at 11:24 AM