The Anywhere's 3: Books vs Reality

A rusted Chrysler sat under the carport. Not a good sign. 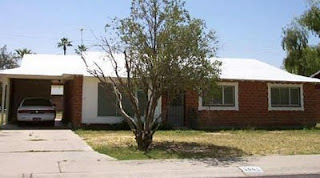 Kyle-Ferdinand slowed as he neared the sixties rambler, debating if he should turn back and face more middle grade trauma, or try his fate. Locking his backpack firmly over one shoulder, he pushed through the six-foot privacy fence and rounded to his bedroom window.

With no screen, the window made for an easy ground-level escape at any hour. Of course, chances are no one would attempt to stop him from exiting through the front door—even in the middle of the night, but this way he didn’t have to risk running into his father.

Speaking of whom, he wondered how he’d be able to get out of hot water this time. Maybe if he pretended not to be home until Dad left for work—where he should be now…

He landed in a pile of discarded candy bar wrappers, wadded paper and dirty shirts. Dresser drawers stood ajar, contents spilled half way across the floor. Random shoes emerged from beneath a sea of blankets, Pokémon cards, and old forgotten action figures.

He stood a moment, bewildered by the disaster of a room. He remembered leaving the blanket a mess—but he left it on the bed, rumpled. The rest? He wasn’t this much of a pig.

He bent to turn the garbage can upright, and noticed the crinkled paper that had been uncrumpled, his failed “Hans von Aachen” reproduction pencil sketch. The lions head was still very wrong.

He frowned. It should be balled with the rest of his failures.

But all of them lay open, strewn atop the disaster, spaced evenly, organized in the pattern of…a diamond? No, an arrow—pointing to the door.

Dad didn’t do this.

An empty water bottle crunched under one foot as he crept forward. He froze.

A snore rattled in from the open door.

He slipped out of the disaster, into the hall, then living room. Books framed the walls. Giant mounted shelves made the place look like a library—seriously not what visitors expected from the look of the place—more like a private English study, except not as elegant. The shelves even came from a library—when the local one shut down five years back. Having grown up with this, he didn’t know how people could exist any other way.

Dad lay, passed out in a recliner at the center, several empty beer bottles surrounding him.

Kyle-Ferdinand scratched his head. Dad rarely drank, so what was this?

A book lay across his parent’s chest, open. He lifted the ancient volume, turning it over. The pages rustled. They touched his skin like the caress of an old friend. Whispers echoed past his ears.

Turning in a circle, he searched for the source of noise, but the only potential culprit lay in a graceless heap at his feet.

Pulse racing, he reached for the auburn cover. It warmed his fingers. The pages flipped, almost on their own, to an illustration. 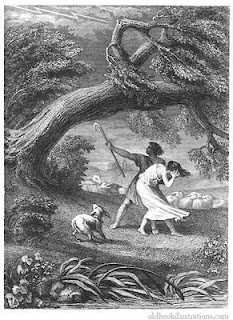 A woman in white hid her face from the oncoming lightning bolt as it struck a tree. Her shepherd protector rebuked the storm, dog cringing at their feet.

Goosebumps started up his arms. A shiver trickled down his spine.

He would have turned to see who spoke, but the word had come from the book. From the book.

The woman on the page uncovered her face.
Posted by Crystal Collier at 11:51 AM