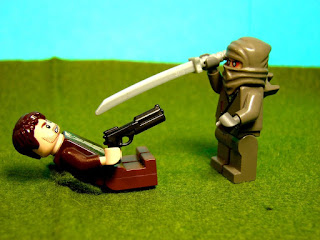 At three a.m. I started this mental debate: Which would you rather have battling for you? An army of Cowboys, or Ninjas? (Yes, these are the crazy kind of insomniatic conversations I have at 3 a.m.) So, which would it be for you? Let me lay out a few selling points and feel free to add your own.

My brothers were fascinated with becoming ninjas. One thing I learned through them was stealth. I know how to stand right behind someone and stay in their blind spot. Ninja's are masters of being invisible. So, you might argue, they're the more effective soldier. Well, they're certainly sneakier. Cowboys are bold. You hear them coming--with their whooping and thundering horses. I dare say many a battle would be won just by the fear factor their approach inspires. So which is better? Silent assassinations, or intimidation?

Throwing stars might be silent and painful, but nothing can make you dead faster than a bullet. Granted, I wouldn't want to face a katana at close range. Then again, I wouldn't want the blunt force of a rancher's fist either. So, is this a close range or distance battle? Are you afraid the neighbors will overhear and send in the cavalry?

I think this is a no-brainer. HORSES. =) (Those ninja shoes are so stinking awkward.) 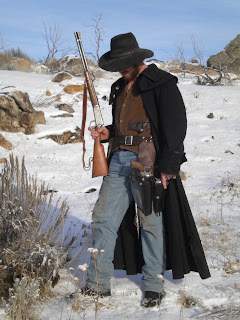 Man in a Duster 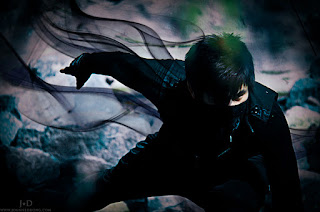 or Man in Black

(Sorry gents, this one is intentionally skewed toward the ladies.) Which one do you want coming to your rescue?

Yes, this is all random silliness, but it makes me grin, and hopefully it makes you grin too. Happy Friday!

So what's your vote? Which would you hire? An army of ninjas, or an army of cowboys, and why?
Posted by Crystal Collier at 8:00 AM