How to NOT Write a Novel Beginning 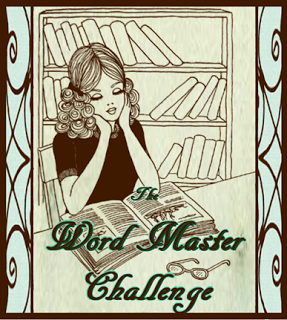 As part of her new Word Master Challenge series, one of my genius blogging friends, Misha Gericke, has put together the January contest--to write an awful, yet entertaining beginning to a book. Her words specifically:

In less than 300 words, I want to see your idea of the WORST beginning you can possibly write. The funnier and more creative you are, the better.

This was too fun to resist. I started with the "It was a dark and stormy night" angle, then transitioned to "The alarm jolted him out of bed", but ultimately, I had to go with my gut:

Once there was a girl named Martha. But Martha wasn’t like other girls. Martha had a problem. See, Martha didn’t have two parents, or a pet cat, or a car named Dear John, or a house for that matter. Martha lived in the tumbleweeds of a triathlon training ground, and Martha was a fairy.

What kind of parents named a fairy “Martha”? Why, the kind who proscribed to Better Homes and Better Gardens, and then got themselves blown up in a car-jacking on their way to meet the infamous namesake of their one and only child, Martha Stewart.

But that’s not who our story is about.

Cedric, the guardian angel and muse of a certain now-dead magazine writer, faced the greatest dilemma of his cherubic career. And what is that, you may ask? His charge was dead. No, worse than dead. He was undead—munched on by a mindless zombie while snoozing at the Chicago airport between interviews about the difference of western and eastern influenced garden gnomes.

Returning to heaven now was not an option. So Cedric packed his red and blue flowered knitting handbag, strolled on down the highway, and stuck out his thumb, hoping to find someone he could dress up and pass off as his dead…undead writer.

A sleek black car hissed to a stop on the ice-covered curb. The privacy-tinted window rolled down and a man wearing dark fifties shades grinned, flashing a set of sharp canines.

“Good evening,” he clucked through a thick Transylvanian accent. “Do you require a, uh, lift?”

Cedric thought there might be something strange about the driver.

“No, I am not a blood-sucking child of the night.” The driver lifted a hand and ruffle-laced sleeve. “You will be perfectly safe in my car.”

Cedric shrugged and climbed in. 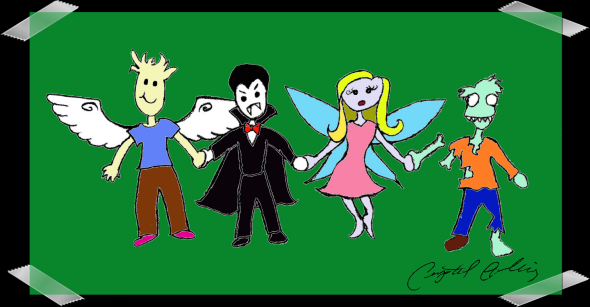 And there you have it--a rip on the Paranormal trend using true and tried techniques that send literary agents running for the hills. Given another hundred words we would have met a werewolf, and perhaps a ghost too. Another two hundred words, we probably would have waken up to an alarm clock on a dark and stormy night. Alas, you can only go so far in 300 words. Oh, and enjoy this Crystal Collier original, brought to you by my liberated inner cartoonist.

So, friends, what's the worst beginning you have ever read to a story?
Posted by Crystal Collier at 5:55 PM