Have You Ever Sent Someone Off to War?

Have you ever sent a loved one off to war?

Memorial day in the States is Monday. What is Memorial Day? The day we celebrate soldiers, but especially fallen soldiers. It has become a day to honor the men and women who serve in the military. I think about this frequently--what it would be like to pray every day for a father/mother, a husband/wife, a son/daughter, a brother/sister who has gone to fight for the freedoms I cherish. The fear they will not return, the struggle to keep a relationship strong over long distance, the stress of being a single parent while a spouse is deployed... I am left in awe of those who sacrifice so graciously--not just those who leave, but those who let them go.

To all who have made that sacrifice, a HUGE, heartfelt thank you. You are a true hero.

Quick heads up: I'm sharing words of inspiration plus a personal turning point on Diane Wolf's blog. Check it out HERE. 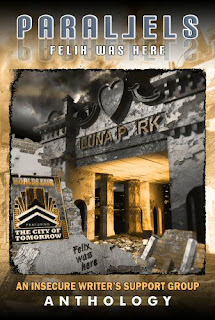 Last week we met the talented Cherie Reich and had an opportunity win her fantasy novel, REBORN. Everyone who guessed her Truth or Lie game correctly were entered into a random drawing for the chance to win an eBook.


3. Cherie has studied six languages. Unfortunately, she’s only proficient in one.

The lie: #2. Cherie only changed her major three times (general studies to vocal performance to classics). If she had a chance to do it all over again, she would have majored in something else. Maybe anthology (linguistics) or something to do with computers (graphic design or websites) or history.

And now meet a story from the author of RAINERS in the Parallels anthology:

Some teens go to the Caribbean on spring break. Piper goes to save the world.

Piper Dunn isn’t who you would call a normal teenager. For one thing, she doesn’t want anyone to know she was born with a blowhole. Even stranger, she has two love interests. Joel, a fellow dolphin-human hybrid, and Tyler, a human.

It’s hard to choose when a mad scientist is hot on Piper’s trail. Worse, she’s trapped in the Bermuda Triangle. And . . . wait for it . . . Angel, her test-tube daughter, is apparently a real-deal reincarnation. It all adds up to an impossible situation, with happy endings all but lost at sea. Unless, of course, a voodoo high priestess casts a spell or two . . .

Multi-published author Sandra Cox writes YA Fantasy, Romance, and Metaphysical Nonfiction. She lives in sunny North Carolina with her husband, a brood of critters and an occasional foster cat. Although shopping is high on the list, her greatest pleasure is sitting on her screened in porch, listening to the birds, sipping coffee or a latte, and enjoying a good book. She's a vegetarian and a Muay Thai enthusiast.


You might run across Sandra munching on pepper-jack sticks.

Find her on Facebook (likes appreciated) or her Blog.

Sandra gave me two truths and one lie to test your "lie detector" skills. Those who figure out the lie will go into my magic hat for the chance to win LOVE, LATTES and MUTANTS in eBook. (The first book in the series.)

1. I was the third generation in my family to be married on Christmas Eve.

3. English is my second language.

So sleuths, which is the lie? Do you know any military families who deserve a salute? Ever heard of metaphysical nonfiction? Have you met Sandra?
Posted by Crystal Collier at 8:00 AM