9/11 Memorial: Learning From Tragedy, and Giveaway

And now, it's time to announce the winner of a Screwing up Time coffee mug AND coupon for a copy of the book on Smashwords. Remember, C.M. Keller also promised a coupon to anyone who guessed right, so... 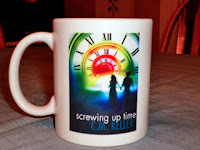 1. C.M. was a member of the ICSA women's sailing team that took first place for the season.
2. She has ridden a sea turtle.
3. She worked her way through college doing chromosome analysis.

This week was a HARD one, but the lie is:

#1, She was actually asked to be part of a sailing team, but only because they were very desperate. It didn't end up fitting into her schedule.

Way to guess Liz, Laurel, Tammy and Patti! You are officially human lie detectors. (C.M. Keller will be contacting you shortly with your coupon.) And the GRAND PRIZE winner is:

And now, it's been a long time since I've had a guest blogger here, but it's a special day so please welcome Kelley Hicken. She's an amazing writer who's kicking off a new critique forum with regular writing challenges, Scribbleweed.com. She has generously offered a $25 Amazon card (!!!) to the winner of today's Truth or Lie game. That's like, a boatload of books!

But first, let's remove our hats, lower our flags, and take a moment to remember.

September 11, 2001 is perhaps the most influential date in the modern history of our country. The residual effect on our economy, politics and psychology of our citizens are still felt twelve years later.

We can’t go back.

When we watched the second plane hit the World Trade Center, it confirmed our fear. This is no accident. We are under attack. We saw the fires, the jumpers, the towers falling, lives lost, dreams destroyed, and we asked the same question echoed around the world.

Time gives us the distance to see the events of 9/11 from a different perspective. We are no longer characters in the story, but readers with a big-picture view. From this vantage point, it is easier to extract meaning and knowledge. From here, we have the opportunity to use real-life tragedies to strengthen our character.

Crisis reveals character. Consider why ordinary people helped the injured out of the building and then went back into the smoke and flames to find others. We act on instinct in these situations and show the coward or hero we’ve already become.

Identical beliefs can influence opposite actions. Securing a place in heaven is what motivated the suicide bombers to kill. Perhaps the same belief inspired some of our NYC heroes to save lives. They were all convinced they were doing the right thing. Be careful what you choose to believe, especially about yourself.

Fear is the opposite of freedom. These ordinary people didn’t wait for a more qualified hero to come. They fought as if the outcome depended on their efforts alone. What would happen if we all stopped imposing limits on our possibilities in response to fear? I have a hunch we would all be a bit more admirable, like the heroes we remember today.

Thanks, Kelley, for that beautiful tribute. And now, to lighten the mood a little, let me officially introduce you:

Kelley Hicken is a YA fantasy novelist from the beautiful Pacific Northwest and creator of the brand-spankin’ new writer’s website, www.scribbleweed.com. She is currently in the "somebody kill me" editing process of her debut novel, The Halcyon. When she isn't banging her head on her keyboard she is most likely spending time with her family, hiking in a forest, or killing a plant in the garden.

Her favorite cheese (this week) is mozzarella. She may or may not eat a fistful every time she shreds it for family pizza night.

Okay human lie detectors, which is the lie? AND be sure to check out Scribbleweed!
Posted by Crystal Collier at 8:00 AM