Today I'm happy to be a part of the cover reveal and sneak peek blog hop for Mary Waibel's novel, Charmed Memories, the second book in the Princess of Valendria series. Here is the lovely cover, designed by the talented Marion Sipe. 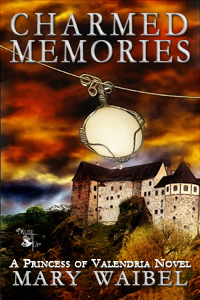 Blurb:
Prince Trevor has always placed duty to his kingdom above the desires of his own heart. But when his betrothed is lost at sea, he finds himself torn between honor and love.

After four years of searching for the missing princess, he begins to secretly long for Lady Bri, the Woodland Guide he works with each day. But the law says he must marry a princess, and Bri is barely a noble.

When Trevor learns that Bri was shipwrecked at the same time and place as the princess, he begins to believe he has finally found his bride-to-be. But his happiness is
short-lived. Bri has no memory of her past, and the princess wasn't the only girl who disappeared from the ship.

Desperate to prove Bri is his princess, Trevor unwittingly places the two of them
in grave danger. Buried in Bri's memories are deadly secrets someone wants kept
from the light of day, and learning who she is may cost more than either is willing to
pay.

Another roll of thunder rumbled as he halted before the large door at the end of
the hallway. Laughter and chatter drifted out through the iron barred window. Every


time the ship dipped, Princess Elsbeth and Lady Lisabet squealed, their voices highpitched and grating. As if their screams would help them if the ship broke apart in this storm.