SCI-FI FANS, Can You Guess the Lie (and WIN)?

It's game time! But first, let's meet the winner from this last week.
Writerly Wednesdays here are dedicated to writers and readers. If you've published anything for Young Adults with a fantastic twist (fantasy in all varieties, paranormal, speculative fiction, horror, sci-fi, dystopian, cheese, etc.), shoot me an email (crystal AT crystal-collier DOT com). I'll be shouting about awesome books, sharing new covers, or participating in book releases every week--and I'd love to share yours. Spots are filling up quick, so schedule a date now.

Before the fun, let's announce the winner for last week. Celeste Holloway shared with us Sebastain Falls and offered an ebook to the human lie detectors among us. She told us two truths and one lie about herself, and those who guessed correctly were entered into a random drawing to win. The options were:

#1 (and 3). Celeste is not a hunter and fisher. *gasp* But what's more, I've been in final edits for the last couple weeks, and my poor, over-used brain has apparently reached its max because Celeste is not actually afraid of crows, she's afraid of cows. (Can you see what my brain did there?) Anyone who guessed 1 or 3 was entered in the drawing for this week.

Way to go those of you who guessed right! You are officially human lie detectors. And the winner is: 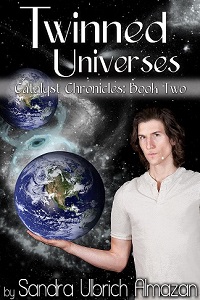 In the aftermath of a family tragedy on 21st century Earth, Paul discovers he’s the clone of Sean Lyon, his great-great-grandfather and a famous TwenCen musician. Suspecting his mother’s death was no accident, Paul comes up with a plan to trick the answers out of the great-uncle who had him cloned. But in order to make his plan work, Paul needs help from Sean himself—and Sean’s time is running out in the TwenCen universe next door. Although Paul’s family lives on the spaceship that travels between the universes, he’s never been allowed on TwenCen Earth. Now, with the help of his friends, his disguise-creating holoprojectors, and a quantum quirk, Paul must make his way to Sean while evading other time travelers who fear he’ll change the history of the TwenCen universe. If Paul is to achieve justice, he must not only risk his own life, but the wormhole connecting the universes. “To be or not to be” was a simple question in comparison... 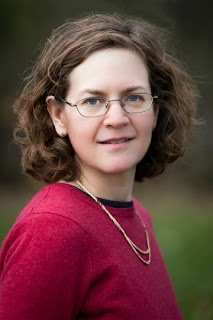 Sandra Ulbrich Almazan started reading at the age of three and only stops when absolutely required to. Although she hasn’t been writing quite that long, she did compose a very simple play in German during middle school. Her science fiction novella Move Over Ms. L. (an early version of Lyon’s Legacy) earned an Honorable Mention in the 2001 UPC Science Fiction Awards, and her short story “A Reptile at the ” was published in the anthology Firestorm of Dragons. She is a founding member of BroadUniverse and a long-time member of the Online Writing Workshop for Fantasy, Science Fiction, and Horror. Her undergraduate degree is in molecular biology/English, and she has a Master of Technical and Scientific Communication degree. Her current day job is in the laboratory of an enzyme company; she’s also been a technical writer and a part-time copyeditor for a local newspaper. Some of her other accomplishments are losing on Jeopardy! and taking a stuffed orca to three continents. She lives in the area with her husband, Eugene; and son, Alex. In her rare moments of free time, she enjoys crocheting, listening to classic rock (particularly the Beatles), and watching improv comedy.

Sandra has several cheese of choice, but especially loves cream cheese on toast for breakfast.

Sandra gave me two truths and one lie to test your "lie detector" skills. Can you figure out the lie? Those who do will go into my magic hat for a chance to win an ecopy of Twinned Universes. How cool is that? You have until Tuesday, August 20th at 1 p.m. to guess--and be sure to come back for the answer on August 21st!

1. Sandra can make both bread and cheese from scratch. (If this is true, I'm adopting her, btw.)
2. Sandra has a black belt in karate. (Eek, watch out!)
3. Sandra occasionally walks around at work and home balancing a book on her head.
Okay human lie detectors, which is it?
Posted by Crystal Collier at 8:00 AM