Hey friends, how would you like to play a game today?

As part of my writerly Wednesdays, we're going to get to know a little bit more about some of the AWESOME books recently released, and some little known facts about their authors. But more than that, giveaways and chances to win free stuff await--because who doesn't love the chance to win, eh?

Monday, Catherine Stine released her sequel to Fireseed One, Ruby's Fire. She has received much praise for her other works, and I, for one, am excited to pick up this series and get started. 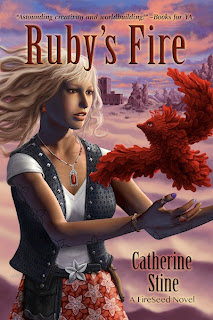 Seventeen year-old Ruby and her little brother Thorn, have only known a life blighted by the extremist Fireseed Cult. The night Ruby is set to be claimed by one of its cruelest and oldest leaders, she makes a bid for freedom. With Thorn in tow, she stumbles into the world beyond, and finds an opportunity for a fresh start in Skull’s Wrath under the guidance of Nevada Pilgrim, a woman who may not be all she seems. Ruby's new life could bring her friendship, love, even fortune, but nothing comes without a price. Is Ruby's talent for elixirs keeping the roof over their heads, or do some of her associates have a more sinister and lucrative interest in them? Life outside a strange cult isn't without its dangers, and the experience leaves Ruby transformed and communing with the Fireseed more closely than she ever would have imagined. Stine delivers a thrilling adventure led by an exciting cast of characters, and the romance is really well handled. 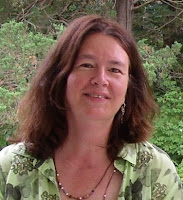 Catherine Stine writes YA, New Adult and middle grade fiction. Her YA futuristic thriller, Fireseed One, illustrated by the author won finalist spots in both YA and Science Fiction in the 2013 USA Book News International Book Awards. It was also granted a 2013 Bronze Wishing Shelf Book Award and a 2013 Indie Reader Approved notable stamp. Her YA Refugees, earned a New York Public Library Best Book. Middle grade novels include A Girl’s Best Friend.

More and more, Catherine enjoys writing speculative tales where her imagination has wild and free reign. She has taught creative writing workshops at the Philadelphia Writing Conference, Missouri University Summer Abroad, The New School and in her own ongoing NYC writing workshop. She loves her readers, and enjoys blogging.

Sign up for her newsletter to learn about freebies and future giveaways.

Here's your chance to win a copy: a Rafflecopter giveaway

And now for some fun! *rubbing hands*

I asked Catherine to share a couple unique facts about herself. She gave me two truths, and one lie. Can you figure out the lie? The person who does will win either a signed paperback (US only) or ebook of Ruby's Fire. If there's more than one, their names will go into my magic hat. You have until next Wednesday to guess--and be sure to come back for the answer on July 3rd!

1. Catherine sat next to Tom Petty on a first class plane ride to LA.
2. Her son's band played All Along the Watchtower with Eddie Vedder.
3. Buddy Guy invited her to a private bash.

Okay human lie detectors, which is it?
Posted by Crystal Collier at 8:30 AM