Has anyone ever fought a battle for you?

I have several older brothers, and despite the conflicts we had as children, we've always been fiercely loyal to one another. Voltaire nails it on the head. I knew if I ever had a problem with kids at school or in the neighborhood, I could call on my brothers to stand up for me.

Today is Memorial day, and as one who has lost a father and a brother, I look on this holiday quite differently. My father did not die fighting for my freedom, but he gladly would have. My brother was not a casualty of war, but he would have given his life gladly to defend those he loved. As I think about that, I picture the many families who's fathers, brothers, sisters or mothers have given their lives for the cause of freedom. My heart breaks for those who have sacrificed. It is buoyed up by the love of these men and women, for: 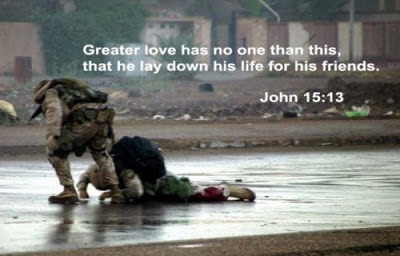 Here's a heart-felt thank you to all those who've sacrificed--be they soldiers who have passed on, or families who've made due without a vital part of their hearts. You are what makes a nation great. You are true heroes.
Posted by Crystal Collier at 8:00 AM

Labels: fallen soldiers, greater love hath no man, I do not agree with, Memorial day, True heroes
Email ThisBlogThis!Share to TwitterShare to FacebookShare to Pinterest