An Interview with Death 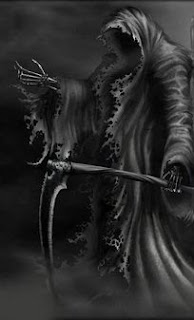 The reporter fed a paper into his typewriter with trembling hands. “I can’t believe you’ve agreed to do this!” He shook almost as badly as the paper.

“What can I say? I’m a softie for last requests.” I settled into a comfy armchair across from his desk, resting my scythe against the wall.

“I love the sneakers by the way.” He sat.

I glanced down at the old Converse. “They’re a lot more comfortable than my human-skin boots.”

I sighed. Why did no one get that Death has a sense of humor? I mean, death is a rather hilarious thing—Jack Daniels died from a toe infection after kicking his safe in anger, and one dictator offed himself on too much Viagra… People are funny creatures.

“Death,” I corrected. “I’m not grim, and ‘Reaper’ is so derogatory. I mean, I’m one of the four horsemen—you know, as in there’s four in all of existence?”

I pointed at the typewriter, then tapped my wrist.

“Death then, how did you come to this…magnanimous position?”

I blinked back my astonishment. Wasn’t that obvious? “I and my brothers work for the big cheese. You know, the guy behind destiny? Don’t tell me you’re an atheist.”

He froze, swallowed, and started typing a little less steadily. “You say you’re one of the four horsemen, but I don’t see a horse.”

I chuckled. “That’s because Donavan is invisible.” Turning my head, I clucked, “Aren’t you, Donny?”

The reporter studied the empty space with wide eyes.

I shook my head. “Who needs a horse when you’ve got mass transit? Busses, taxis, the subway…”

“You use mass transit?”

“What happens to the people sitting next to you?”

I shrugged. “They drink their coffee and read their papers.”

“Sitting next to you doesn't kill them?”

He sat back. “How do you do it then? Mass transit can’t possibly be fast enough for the thousands of deaths every minute-”

“Approximately 107 to be correct.” I cracked my knuckles. “Time isn’t a consideration when you can hop in and out of dimensions. I mean what kind of guy would I be if I never stopped to eat a doughnut or smell a rose?”

His jaw again dropped. “Dimension travel? There are multiple…dimensions?”

Oh these logical ones who thought they knew how the whole universe operated! “Time. I can step in and out of time. Kind of knocks you mortals over the head, but it doesn’t exist for me.”

“And that’s why people don’t see you coming.”

“No, it’s because of my super cool invisibility cloak—like Harry Potter.” 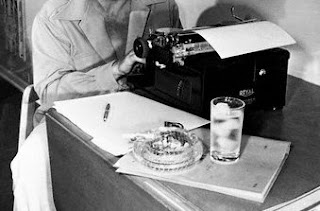 He stared, blankly. I think he was starting to get my sarcasm.

“Okay fine, I don’t have an invisibility cloak,” I admitted. “I’m made of finer matter than your eyes can perceive, unless I want you to see me.”

“Or are already dead.”

I pointed to his paper. “What you got there? Read it back to me.”

He looked at the paper, squinted, then frowned. “I, I don’t understand. How can it be blank?”

Picking up my scythe, I rose, all twelve feet. “Sorry, Robert.” 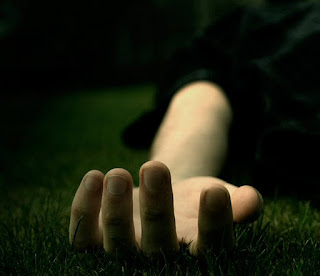 He turned around saw his body lying in the hallway, spilled whisky glass staining the carpet.

“So are you ready to head out now?” I asked.

He let out a long sigh, then looked up at me. “You’re actually a pretty nice guy.”

“That’s what I keep telling people.” I pulled out my keys and the door to the other side materialized. “Enjoy the free bagles on the other side.”

He paused in front of the door, eyes brightening. “We can eat on the other side?”

“No.” I would have smiled if Death could smile. “But it's so fun watching you try.”


And for the Halloween Hop:
Scariest book: Fear Nothing by Dean Koontz
Movie: (Okay, I'm not such a fan of scary.) Army of Darkness or House 2
Costume: Mime (Been an "enchantress" or "sorceress" the last 9 years. Change is good.)
Posted by Crystal Collier at 4:04 PM