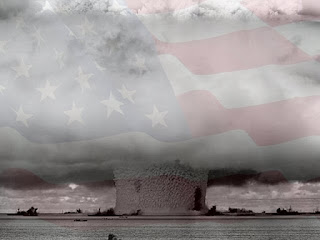 "This is the way the world ends, not with a bang but with a whimper."

As we've been seeing lately, major countries and their decisions affect the world. We live in a global economy, and I for one think that's an amazing thing. The world feels a bit smaller, more accessible.

So what is my deal? Why am I calling America's demise?

History. And no, it's not what you think. Last month a friend posted about a negative population growth and asked people's opinions on the matter. The majority thought this was a great thing. More resources for the rest of us!

First of all, let's define a negative population growth: It means the current population isn't producing enough children to replace the current generation. Basically, Mom and Dad decide to only have one child. Or a fur baby instead.

A few years ago I attended a lecture given by a man whose job is to track population growth, decline, and the affects it has on the economy and every day life. (He works for the US government). Until that evening, I might have thought a declining population growth wasn't a big deal.


I WOULD HAVE BEEN WRONG. SO WRONG.

We're already seeing the results in many European countries. Their numbers dwindle, and so does their world influence, their financial status, and their ability to support themselves as a country. They begin taking on debts to stay above water, and then default on them or raise taxes beyond reason. How many countries are bankrupt at the moment?

When good people stop making proactive choices that benefit others, the world suffers.

Think about this: an educated, thriving couple decides not to have children, while the druggie on the other side of town ends up irresponsibly spawning 3, 5, 7 kids (whom they don't raise). Who is the future of that nation? What kind of future can the generation after that expect? What kind of country is this going to be in just a generation or three?

Jobs go empty. Pay increases for menial labor that no one cares to do, and then the cost of living skyrockets. Cities shrink and empty homes fall into disrepair. Because there are less producers, there is less national product, and the tax burden falls heavily on the workers who remain. There aren't enough doctors, police, firefighters etc. to support the populace. Out of necessity, high paying jobs go to other countries because the basics (like food production) must be covered on the home turf. That, or immigrants end up filling the vacancies. Roads, sewers, and electrical sources crumble because there aren't enough able bodied people and finances to maintain them. The wealthy find homes in more prosperous, less taxed locations, and after only a generation or two, we live in a second world country. Or third.

The lecturer I listened to was sincerely terrified for the future of this great nation. He was raising the warning voice and asking us to raise it as well.

All things change. I get that, but please tell me there are a few other people out there responsibly and intentionally raising the next generation FOR THE SAKE OF THE FUTURE. (I'm raising enough to cover at least one and a half other families...which doesn't stretch a long way.)

Let's not intelligence ourselves and our kids out of a prosperous future.

And last of all, the IWSG question for the month: What are your ultimate writing goals, and how have they changed over time (if at all)?

My overall writing goals remain the same: get out the rest of my tri-series and capstone book/series, then everything else. Basically, share all the cool stories burning through my brain. The timeline is different though. It's not a big deal if I can't get back into the stress of publishing for a couple years. I'm also more focused on what my writing is saying. What positive message am I planting in readers heads? How am I exploring the range of traumas & emotions we poor humans experience?

Last month Donna K. Weaver shared KINGS CROSSED LOVERS along with two truths and one lie. Anyone who guessed was entered to win an audiobook or eBook of SWING VOTE.

1. I was interviewed on TV just before the release of the last Harry Potter Book, Deathly Hallows.
2. I started school in Greece.
3. I flunked the second grade.

The lie: #2. Donna actually did flunk second grade. *gasp* But she's definitely made up for it since. Out of hard things we gain greater strength.

How is your summer going? How about a little mystery to spruce it up? Check it out: 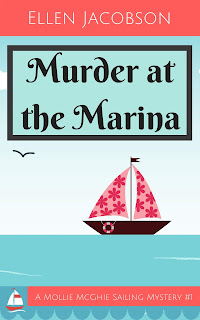 A dilapidated sailboat for your anniversary—not very romantic. A dead body on board—even worse.

Mollie McGhie is hoping for diamonds for her tenth wedding anniversary. Instead, her husband presents her with a dilapidated sailboat. Just one problem—she doesn’t know anything about boats, nor does she want to.

When Mollie discovers someone murdered on board, she hopes it will convince her husband that owning a boat is a bad idea. Unfortunately, he’s more determined than ever to fix the boat up and set out to sea.

Mollie finds herself drawn into the tight-knit community living at Palm Tree Marina in Coconut Cove, a small town on the Florida coast. She uncovers a crime ring dealing in stolen marine equipment, investigates an alien abduction, eats way too many chocolate bars, adopts a cat, and learns far more about sailing than she ever wanted to.

Can Mollie discover who the murderer is before her nosiness gets her killed?

Buy your copy now on Amazon.


Ellen Jacobson writes mystery and sci-fi/fantasy stories. She is the author of the “Mollie McGhie Sailing Mystery” series. She lives on a sailboat with her husband, exploring the world from the water. When she isn't working on boat projects or seeking out deserted islands, she blogs about their adventures at The Cynical Sailor.

You might run across Ellen on the open sea, enjoying some tasty goat cheese, especially on crusty bread along with some prosciutto or Parma ham.

Ellen gave me two truths and one lie to test your "lie detector" skills. If you guess the lie, right or wrong, you will be entered to win an EBOOK of MURDER AT THE MARINA. (Open internationally.) DON'T HAVE A BLOGGER ACCOUNT OR AN EMAIL ON YOUR PROFILE? No problem. EMAIL crystal@crystal-collier.com to enter.

1. I once dressed up as Lt. Uhura from Star Trek for a scifi/fantasy convention.
2. I refuse to eat anything that has a wooden stick in the middle, like Popsicles.
3. I'm allergic to tetanus shots and try to avoid stepping on rusty nails at all costs.

So sleuths, which is the lie? What are your feelings on a negative population growth? Are you worried too? Have you met Ellen? Do you like clean cozy mysteries?
Posted by Crystal Collier at 8:00 AM