Giveaways Up to Our Ears!

Are you ready to win a book? Or three? It's time for Writerly Wednesday!

Okay, who's ready for the winner of last week's game? Pk Hrezo shared two truths and one lie about herself and those who guessed the lie correctly were entered into a random drawing to win a copy of her awesome book, Butterman Time Travel, Inc.


#2. Although an admitted red-neck, she can't get into country music. She insists celery is evil and will not wear nail polish because it's unnatural.

And now for this week's special feature, check out Erin Albert's THE PROPHECY! 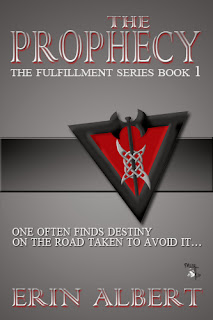 Growing up on a small farm in the kingdom of Vanguard, seventeen-year-old Layla Givens lives a deceptively tranquil existence. But her carefully constructed life quickly falls apart when she’s abducted by a religious zealot who proclaims her The Fulfillment of an ancient peace prophecy and whisks her away to marry her greatest enemy.

Wilhelm, Prince of the Ethereals, is reluctant to meet his new bride. He's grown up believing Vanguards are evil, an enemy to fight and fear...not love. Can he set aside his prejudices and work alongside Layla to bring lasting peace after centuries of war?

Nash, a loner who has never fit in, carries a huge secret, one big enough to destroy both kingdoms. When he accidently meets Layla, he’s no longer content to live in the shadows, but he must resist his growing attraction—for her safety and for the longevity of the two kingdoms.

When Nash's secret is revealed, a firestorm sweeps through both realms, with Layla at the center. Now she must choose between duty and desire while the fate of two nations hangs in the balance.

The Prophesy has been out for less than two weeks (so tell Erin congrats in the comments!) and you can pick up your copy HERE.

Shall we meet Erin?

Erin Albert is an author, editor, and fitness trainer.  Since she picked up Morris the Moose Goes to School at age four, she has been infatuated with the written word.  She went on to work as a grammar and writing tutor in college and is still teased by her family and friends for being a member of the "Grammar Police."  In her free time, Erin enjoys acting, running, kickboxing, and, of course, reading and writing.

Her favorite cheese is that fake, goopy, orange nacho cheese, and she can be found chowing down on it at sporting events or carnivals.

Find her on the web HERE.

Erin gave me two truths and one lie to test your "lie detector" skills. Can you figure out the lie? Those who do will go into my magic hat for a chance to win a copy of her book. Eek! How cool is that? You have until Tuesday, December 3rd at 1 p.m. to guess--and be sure to come back for the answer on December 4th.

1. Erin had a male dog named Lassie who got eaten by an alligator.
2. In college she played a male character (actually a female character pretending to be a male), and a girl hit on her thinking she was a real boy.
3. She was asked to consider being Gertie from ET for a possible sequel when she was a little girl, but refused because she's terrified of ET.

If that wasn't enough, here's another chance to win:

AND LAST, BUT NOT LEAST, there are only a couple more days left of the...

Alexia’s nightmares become reality: a dead baron, red-eyed wraiths, and forbidden love with a man hunted by these creatures. After an attack close to home, Alexia realizes she cannot keep one foot in her old life and one in this new world. To protect her family she must either be sold into a loveless marriage, or escape with her beloved and risk becoming one of the Soulless.

So how do I write books? Julie Musil gets to the reason behind my author tag line.

Read Excerpt #3 in the Mystery Sentence Game with Emilyann Girder: Unravel the mystery of the Moonless night! Gather all 8 hidden words from the excerpts and figure out the sentence to win a free copy of Moonless. Send your mystery sentence to crystal (AT) crystal-collier.com with the subject MYSTERY SENTENCE before December 10, 2013, and you will be entered to win one of 10 copies of MOONLESS—just in time for Christmas. Happy hunting

a Rafflecopter giveaway
Posted by Crystal Collier at 8:00 AM