I LOVE Indiana Jones. The only thing that could make him more awesome would be adding a little Jackie Chan action. --Or maybe a little Zen...as in Kanze Zenjiro.

And since I'm such a huge fan of action, today I have the privilege of revealing Jay Noel's BRAND SPANKIN NEW COVER. Lucky me! Are you ready for this awesomeness? 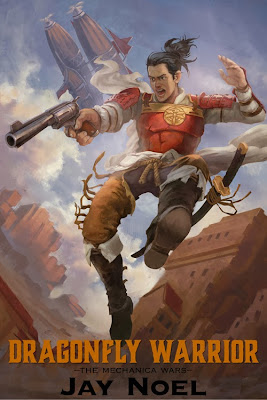 At the age of twenty, Kanze Zenjiro's bloody footprints mark the bodies of those who stood in his way to protect the throne of Nihon. Now, the tyrannical Iberian Empire is bent on destroying his kingdom, and they send their steam-powered giants and iron spiders against him.

Zen embarks on a quest that takes him on the most dangerous journey of his life. To succeed, Zen must live up to his nickname, the Dragonfly Warrior, and kill all his enemies with only a sword and a pair of six-guns. He is called upon to somehow survive a test of faith and loyalty in a world so cruel and merciless, it borders on madness.

Dragonfly Warrior is a steampunk adventure like no other. It's a dynamic mix of Asian and European mythology, the Wild West, martial arts, traditional fantasy, and high powered steam action that will keep you turning the pages.

Dragonfly Warrior is the first book of The Mechanica Wars, and will debut on January 6, 2014.