It's time for Writerly Wednesday! Yay!

And now, it's time to announce the winner of last week's game. Last week The Prosers shared two truths and one lie about the process of writing their collaborative book. Those who guessed the lie correctly were entered into a random drawing for a copy Alchemy.

1. These three authors have written over 8000 facebook messages to each other about this book.
2. They mailed the original chapters to each other the old-fashioned way--via snail mail.3. The school originally had a different name of a real institution for rich, troubled youth, a name they totally fell in love with--but had to change so they wouldn't get sued.

#2, they did mail the chapters to each other for a while, but eventually that became way too difficult, and they switched to doing it the regular way--via the computer. 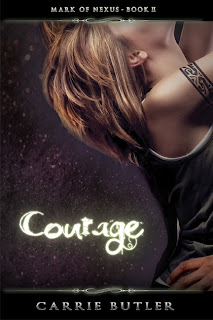 Rena Collins never thought she’d long for the past—back when affection from Wallace, her freakishly strong boyfriend, was the most dangerous aspect of her life. But now that the human-altering organization known as ERA has gone on the offensive, nothing is safe. Her bloodline is exposed, her relationships torn apart, and just when it seems like things can’t get any worse, ERA ups the ante. To save mankind from forced evolution, Rena will have to mend her broken ties and form a resistance... hand-in-hand with the one she hurt most.

This book was released LAST WEEK, and I for one can't wait to read it. Carrie is a fabulous author!

So who wants to meet her? 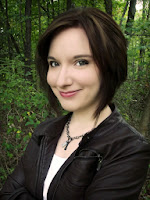 
Her passion for New Adult fiction led her to co-found NA Alley—a widely recognized informational hub for the category. She is the author of STRENGTH (Mark of Nexus #1) and COURAGE (Mark of Nexus #2).

Carrie gave me two truths and one lie to test your "lie detector" skills. Can you figure out the lie? Those who do will go into my magic hat for a chance to win an ecopy of COURAGE. Eek! How cool is that? You have until Tuesday, October 22nd at 1 p.m. to guess--and be sure to come back for the answer on October 23rd and to view the winner!

1. Over 50 exotic animals (lions, tigers, bears etc.) were once set loose on Carrie's hometown.
2. Her level 80 thief on Guild Wars 2 was named after a Firefly character.
3. To win a bet, she once hugged a stranger for thirty-seven minutes.

AND today you have one more chance to win!

a Rafflecopter giveaway
Posted by Crystal Collier at 8:00 AM