An Aversion to Technology

This is Alice. She found a career during World War II as a secretary. Phenomenal secretary—we’re talking the kind who makes their job an art. (120 + words a minute, pristine spelling, grammar and efficiency…) Her weapon of choice? You guessed it. (Typewriter.) She was super excited when they introduced the white-out strip. 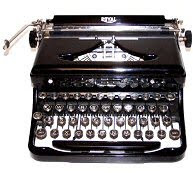 She was not, however, excited when her son, (a medical school computer geek,) insisted on transitioning her to a computer. Reluctantly, and only at his insistence, she began using a word processor. When it dawned that she didn’t have to retype everything for a single mistake, her aversion shifted. Granted, there were phone calls, daily, sometimes hourly, sometimes sooner: “My document disappeared!” “My computer is broken.” “It just won’t work!”

She doesn’t get along with technology, but to her credit, she has overcome—even sends (dum-dum-dum) e-mails! *gasp*

Alice is my grandmother. I inherited her aversion to technology. *hanging head in shame* Having grown up in a house of techies helps, but when it comes down to it, I HATE new programs.

Yes, these are music composition programs. See that title—way up there at the top of the page? I write music: orchestral, vocal, choral, rock, new age, musical theater and cultural. Finale and I have a love/hate relationship, but we’ve come to a point of indifference. I avoid delving beyond the rage-inducing surface, and it promises to function the way it should, most the time. Periodically we still have one-sided scream outs (as that smirky program peers passively at me).

Sonar, it’s new. Really new. I learned Pro Tools once—which is a huge credit to me. Guess what? I even LIKE Pro Tools. It’s not the prettiest, but its functionality is acceptable, and it does not malfunction for no apparent (glitchy) reason. Sonar is arranged for guitar players or garage bands. I am not a garage band. Nor will I ever be.

So, the solution? Ah Grandma, you set a great example. Head down, pressing forward, occasionally slamming bowed head against keyboard.
Posted by Crystal Collier at 4:55 PM